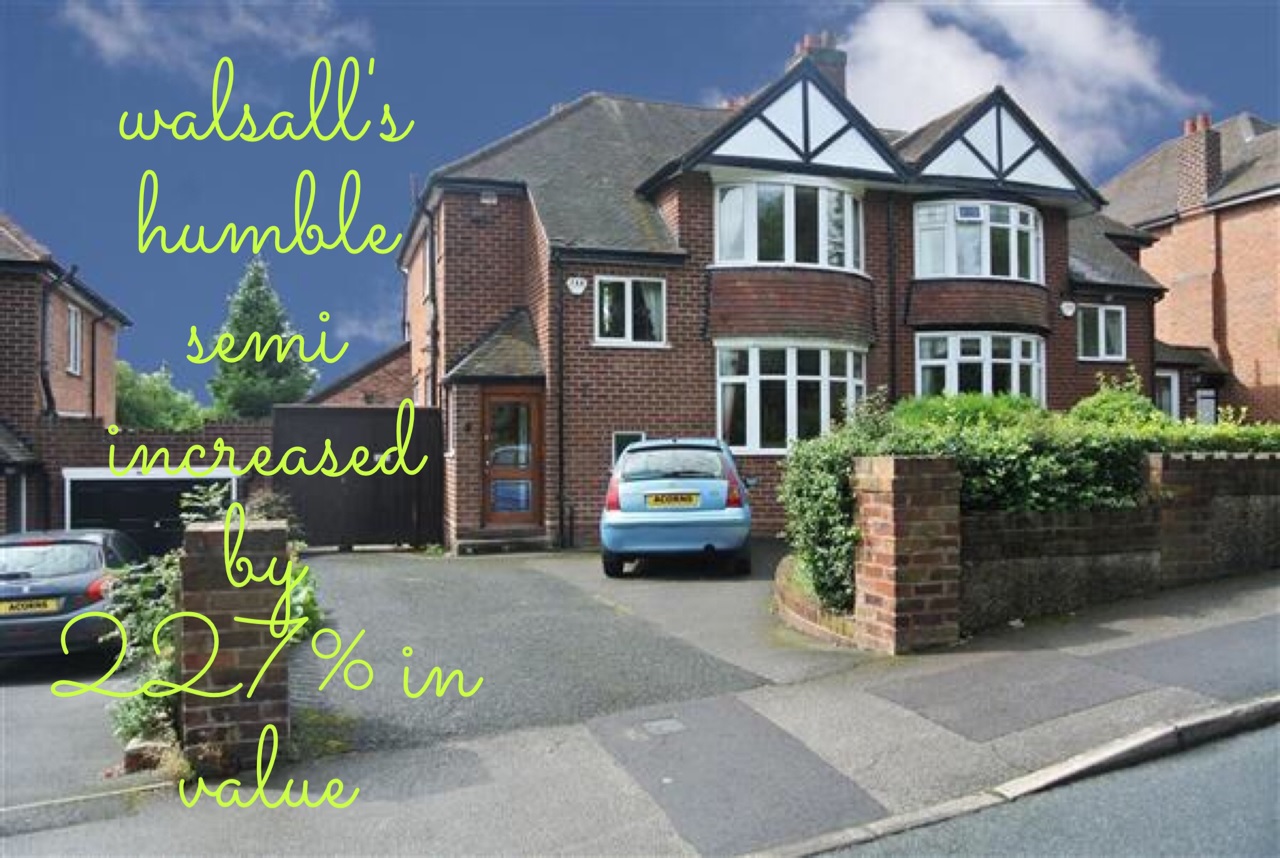 The humble semi-detached house with its bay windows and net curtains has long been ridiculed as an emblem of safe, lacklustre and desperately uncool suburban life; the homes of the likes of Hyacinth Bucket in ‘Keeping up Appearances’ and more latterly Alan Partridge – but they could have the last laugh – having enjoyed one of the highest price growths of any property type in Walsall, up by an average 227% increase in the last twenty years!

The semi is, of course, still hugely popular on new build developments; although slightly more modern in appearance compared to its older ancestor!

The semi can now laugh in the face of its posher detached counterpart, which saw a rise of only 161% in the same 20-year period. Looking at smaller properties, flats/apartments rose 106%, whilst terraced houses did slightly better at 229% although they were starting from a lower base and demand from buy to let landlords has had a big part in driving up the values on that type of house based upon its rental potential.

Such is the attractiveness of the semi, which are cheaper than detached houses but have most of the same benefits for families. Semi-detached houses were built in their hundreds of thousands by the Victorians and Edwardians between the wars and through to the present day. Interestingly in the late 19th Century and early 20th century – they often weren’t referred to as semi-detached – but as villas!

So whilst Europeans live on top of each other in apartments us British chose, in the late Victorian and early Edwardian times, suburban comfort, being near … but not too near, the neighbours! I once heard someone say the semi-detached house was a peculiar crossbreed that doesn’t stand on its own — it is inseparable from its neighbour — yet somehow still embodies a dream of suburban independence. 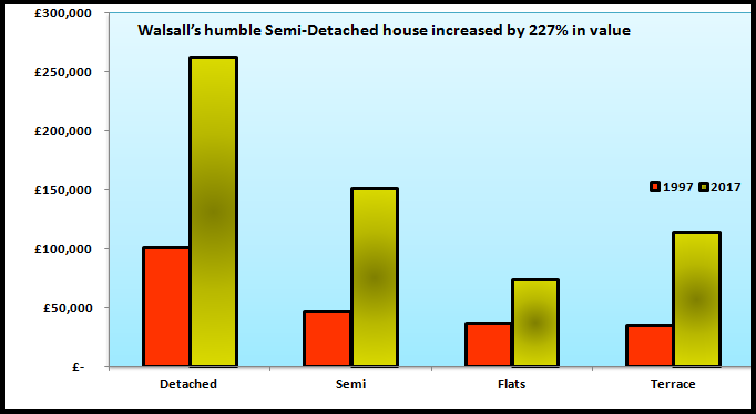 Interestingly, over one in three houses in Walsall is a semi-detached house!

There are 45,393 semi-detached properties in Walsall and they represent 42.1% of all the households in Walsall. Walsall has such a mix of semi-detached properties with the older classic bay fronted semis to more modern ones built in the last couple of decades. Especially with the older ones, the semi offered a hall to provided separation between the reception rooms and privacy for their occupants. Also the downstairs offered larger rooms to accommodate dining tables, whilst upstairs, bedrooms were smaller, yet cosy.

However, probably the most overlooked aspect of popularity for semis is the garden. The front garden, designed to separate the house from the world, and the back garden designed for private relaxation. The semi in the suburbs was relaxing, well presented, plumbed and enhanced by a garden so that when a window was opened the air had a chance of being genuinely fresh… and it’s for all those reasons why around 600 semi-detached houses have been sold in Walsall since May 2016 alone. Still as popular today as they were with the Victorians all those years ago – some things just stand the test of time!

So, if you are looking for a good alternative investment property to a terraced house or apartment, a semi could be a great choice. If you would like my opinion on your investment choices feel free to send me the Rightmove or Zoopla link of the property. Happy to provide a second opinion.